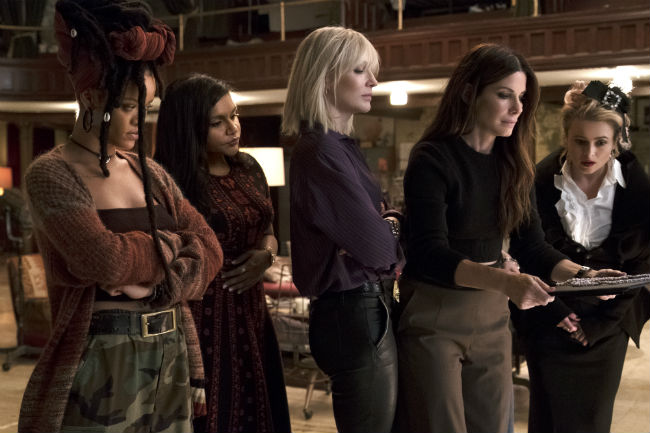 In Ocean’s Eight, tough-talking con Debbie Ocean (Sandra Bullock), gets paroled from prison, and is no sooner set loose on the unsuspecting streets of Manhattan, before she has conned her way into a four-star hotel room with a bagful of high end cosmetics shoplifted from Bergdorf Goodman. Needless to say, Debbie is the kid sister of Danny Ocean, the preternaturally smooth, suave character played by George Clooney in the franchise’s original outings. Danny is dead and buried – buried, at least (the movie is a little cagey about whether or not he’s so dead that Clooney couldn’t appear, at least in a sequel.
Very much in the mold of the Clooney original (let’s not forget that was a remake of a highly forgettable Sinatra movie), Debbie wastes no time rounding up an all-female gang of crooks, hackers and cons, all to pull off an elaborate heist that’s just byzantine enough to leave the audience guessing. This heist has a more feminine flavor than the Clooney/Pitt predecessors – Debbie and her crew are plotting to infiltrate the celebrity-heavy, annual Metropolitan Museum of Art’s annual Gala to steal a legendary Cartier diamond necklace worth $150 million.
Caper movies absolutely require that the audience root for criminals, and do best when the intended crime victim is horribly unsympathetic. Ocean’s Eight is lacking a patsie the audience wants to see stung, like Andy Garcia’s ruthless casino owner in Ocean’s Eleven. The antiheroines here are easy to root for though, even if there isn’t a primary motivation as compelling as classic caper movies like The Sting or Ocean’s Eleven. (There is a subplot involving Richard Armitage that helps there, but the Met and Cartier remain an innocent victims.)

No, it isn’t as elaborate or high-flying as the caper in Ocean’s Eleven. It is clever enough to get by, though, and it is helped by cast chemistry that’s better than the filmmakers could have hoped for. Cate Blanchett, as Debbie’s former partner in crime, Lou, disappears so effortlessly into her streetwise conwoman you almost forget it’s a performance. Helena Bonham Carter, who has a special gift for over-the-top characters, is a scene-stealer as a no-longer fashionable fashion designer who provides an entrée to Cartier. Mindy Kaling effectively plays the team’s essential jewler. Sarah Paulson is a housewife, not entirely out of her former career as a mover of stolen goods. Rihanna more than holds her own as that staple of modern crime movies and thrillers, the wise-cracking hacker. Rising star Awkwafina breaks out as Constance, a street hustler and pickpocket. Anne Hathaway is particularly delightful as a spoiled movie star who’s smarter than people give her credit for. None of these stars really get enough to do, but it’s undeniably fun to watch them anyway.
Rebooting the Ocean’s Eleven from rigor mortis with an all-female cast frankly sounded like a Hail Mary inspired by the success of last summer’s Ghosbusters retread. But Ghostbusters had a commercially viable cast and the technology to outdo the original’s dated special effects in 3D. Toplining with three Academy Award®️ winners – Sandra Bullock, Cate Blanchett and Anne Hathaway – Ocean’s Eight looks like it could be aiming for, God help us, a prestige release.
Thankfully, that’s not the way it plays. Oscar®️ winners have to eat too, and Ocean’s Eight wisely never deviates far from a proven formula. That’s both an asset and the movie’s one big liability – the audience knows the formula and surprises can be hard to come by that way. Despite that, this feminized reboot manages to get the job done better than either Ocean’s Twelve or Thirteen, both of which suffered from a glib, self-aware snarkiness that gave you the uncomfortable feeling that the filmmakers were looking down their noses at their audience.

This movie never makes that mistake. This is smart, glossy entertainment, and if the third act is a little too long, an unexpected guest appearance by the always-entertaining James Corden helps carry the movie over the finish line.
Gary Ross, who has previously directed Seabiscuit, The Hunger Games and Free State of Jones, connects the dots of this caper reboot perfectly competently, if without the styish luster Steven Soderbergh managed on the male original. His stars are more than up to carrying the show, however. At one point in the movie, Debbie says “That somewhere out there, there’s an eight year old girl dreaming of being a criminal. We’re doing this for here.”
Us too, though. The lady felons of Ocean’s Eight steal the audience’s heart.